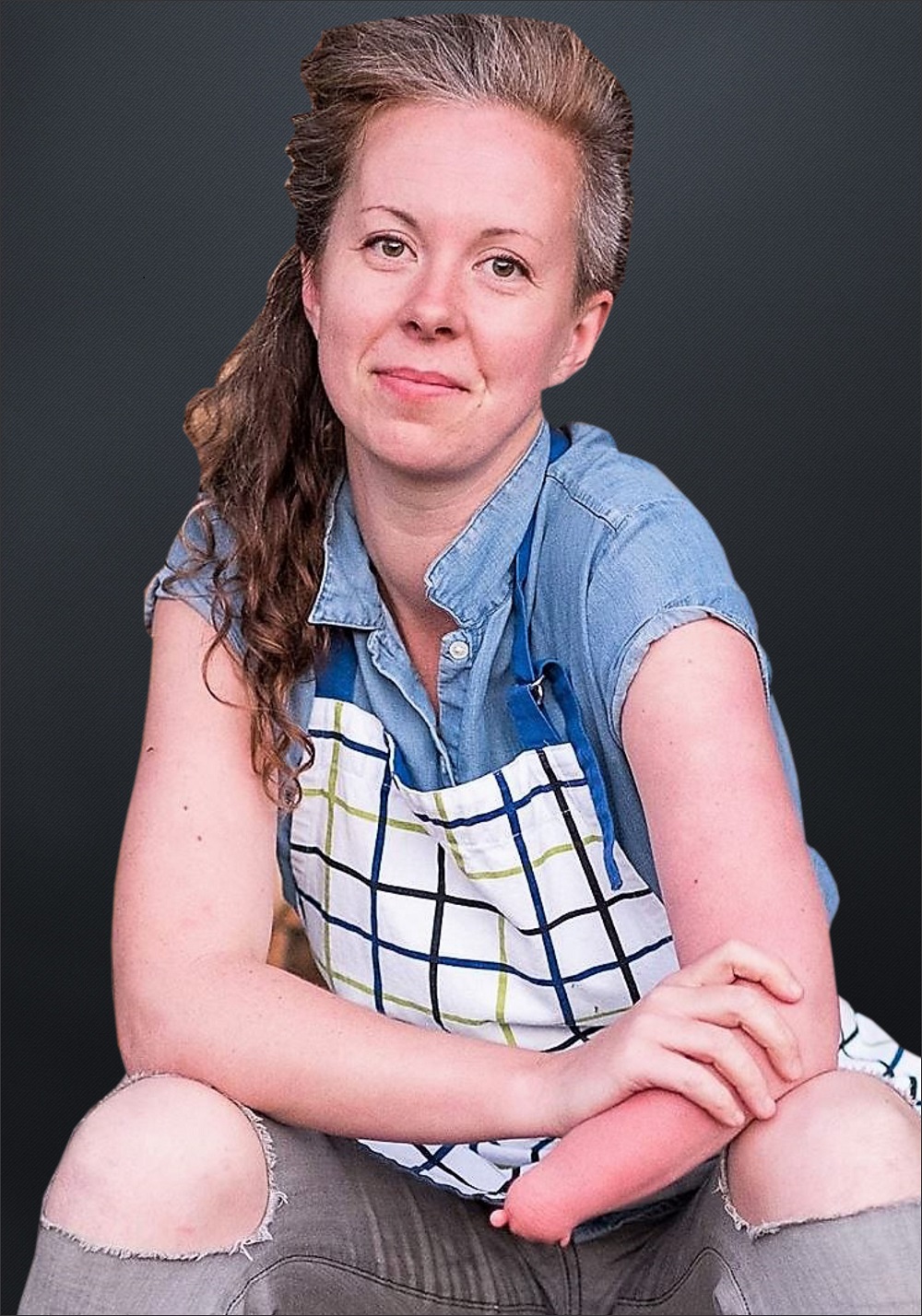 Alexis Hillyard
Stump Kitchen - Nutrition, Diversity, Equity & Inclusion Advocate
Ratings:
Travels From:
Edmonton, Alberta
Language Spoken :
Disability advocate and keynote speaker, Alexis Hillyard is an entrepreneur, vegan chef and is an award winning YouTube Creator for her show - Stump Kitchen. Alexis Hillyard was born without her left hand and is known for using her stump as a kitchen tool while expanding the vocabulary of what's possible in the kitchen. She is a diversity inclusion expert on stump kitchen, which teaches others skills for the kitchen, cooking for the heart.

Alexis Hillyard (she/her) is a queer and disabled YouTube Creator, self-taught vegan chef, entrepreneur, and parent of an energetic toddler. Born without her left hand, Alexis uses her stump as a kitchen tool – from spatula to juicer – while expanding the vocabulary of what’s possible in the kitchen each week on her YouTube show Stump Kitchen. Stump Kitchen is a YouTube series that celebrates body diversity, gluten-free vegan cooking, and the amazing, unique ways we move through the world. In 2016 & 2018, Stump Kitchen won Best Food Blog in VUE Magazine’s Best of Edmonton, Canada.

Alexis Hillyard was featured by Google in a new YouTube video showcasing her efforts to create “a safe space to celebrate the amazing, unique ways we move through the world.” Hillyard, an LGBTQ+ and disabled chef known for her popular Stump Kitchen video series, has been producing videos on her YouTube channel for five years. In that time she has amassed more than 5,000 subscribers and nearly 600,000 views.

The video feature came together quickly over the last few months. “Google googled me and said they were looking for creators to feature and they were looking for disabled or queer creators that were having a good impact,” said Hillyard.  Her videos highlight vegan and gluten-free recipes, often assembled using her stump as a kitchen tool. She uses her platform to celebrate limb differences, and more recently, after having a baby, focus on parenting with one hand

In 2017, Alexis was named as the first Canadian Ambassador to the Lucky Fin Project, an organization dedicated to limb difference awareness, education, and celebration. Alexis was also awarded the Meritorious Service Medal from the Governor-General of Canada for her Stump Kitchen work, which is one of the highest honours that Canada can bestow on its citizens. She is well known for her advocacy to bring awareness and create safe spaces for Gender, Sexuality and Disability Inclusion.

Stump Kitchen has received considerable local and national media attention including TV, Radio, Digital, and Print coverage. The show has been featured on CTV, Global, Food 52, CBC Radio, The Edmonton Journal, and various lifestyle and food blogs. Stump Kitchen has partnered with CBC to produce multiple original videos for their social media platforms, featuring kid co-hosts with limb differences. Alexis loves to challenge society’s preconceived notions around disability by ‘disarming’ her audience with with, charm, and delicious recipes!

Alexis Hillyard keynote speaker is an expert presenter and has a wide range of experience speaking to a wide variety of audiences and organizations. Alexis Hillyard delivers keynotes, workshops & training sessions. They may also host or emcee events. Hire Alexis Hillyard from Edmonton, Alberta for your event to inspire the audience to take action and make change in their work and their lives. Your workplace will benefit from our keynote speaker and their keynote talks and speeches will shift the mindsets or behaviours for the audience members in Canada.

Known as a popular key note speaker in Canada, Alexis Hillyard creates life changing experiences for the participants with practical insights and strategic advice they can implement right after the session. Working with a one our leading expert speaker like Alexis Hillyard from Edmonton, Alberta offers organizations a fresh perspective to assist the people of the organization. No matter if it is a government, association, or business crowd, Alexis Hillyard is a perfect speaker for your event. Through unique practical insights for trending topics and years experience speaking to different organizations, Alexis Hillyard focuses on changing individuals to make better decisions at work and their lives. No matter if you are holding an in person or virtual event, having an influential speaker such as Alexis Hillyard will engage, motivate, and activate the audience to make a change in their lives and inspire action for results to meet organizational goals. Your workforce will benefit from Alexis Hillyard’s presentations and speeches, with measurable results set to shift the people of the organization and core direction of the company. Book Alexis Hillyard speaker for your annual general meeting, conference, summit, or convention in Canada.

HOW MUCH DOES IT COST TO BOOK Alexis Hillyard FOR A VIRTUAL OR KEYNOTE PRESENTATION?

Alexis Hillyard is an expert professional key note speaker with a lot of experience speaking and delivering engaging talks to organizations and audiences in Canada. Each of Speaker Bureau Canada’s talent have different ways to assess their fees, and Alexis Hillyard speaker fee ranges depending on the size of the audience, event format (in person or virtual), event location, and if the organization booking them is a non profit, association, government department/government agency or business/corporation. The speakers we work with are flexible with their fees, and it is important for us to learn more about your event before we approach them, as it is our role to work for you, and to help you find a speaker within budget.

Please contact Speakers Bureau of Canada and provide us with your event details so that we can contact Alexis Hillyard to check availability or confirm the pricing and associated costs to hire a great speaker like Alexis Hillyard for your event. As Alexis Hillyard's agent and as a Canadian top speaker bureau and talent agency for speakers, we are able to propose each event opportunity from each host organization’s behalf to try to help you get in touch with Alexis Hillyard and confirm them for your in person or online meeting/event. We can also provide and advise on the booking process and potentially negotiate their fee. Speakers Canada is a client focused speaker agency, and we work for you in finding good speakers for your team meetings and booking processes.

Speakers Bureau Canada assists companies and event planning teams seeking to hire talent like Alexis Hillyard for speaking engagements, virtual meetings, conference appearances, training sessions and workshops facilitations. Our Canadian speakers bureau does not claim to exclusively represent Alexis Hillyard, however they are represented by Speakers Canada, and we work with them closely for their Canadian speaking opportunities and bookings. As Canada’s top speaker bureau, we represent Canadian motivational keynote speakers and professional guest speakers that will be available on your upcoming events date and location that are withing the budget. Our talented bureau speaker booking agency can help find business speakers or celebrity speakers that aligns with each organization, audience, event theme and the topic themes you hope for the speaker to address in their presentation.

When SBC receives a request to book Alexis Hillyard we provide you with their speaker fees, travel costs and check their schedules. We work closely with the host organization’s event planning team and the speaker to handle the logistics and to relay or negotiate associated costs. Our talented team members then will work with our talent directly or their agent/manager/assistant to confirm the Canadian speaker fee and travel expenses, so that event planning teams can receive an official quote for the speaker appearing at the event. Speaker fees and travel costs vary per speaker and our role is to contact Alexis Hillyard about your event, after we have connected with the event organizers to learn all the event details and/or conference program. Each booking request is unique since session durations and audience sizes can vary which may affect the speaker’s fees. If you are looking to hire Alexis Hillyard, we recommend filling out the booking request form so a booking agent from Speakers Bureau Canada can get in touch with our talent to help you coordinate with your team to engage the speaker for a successful event.