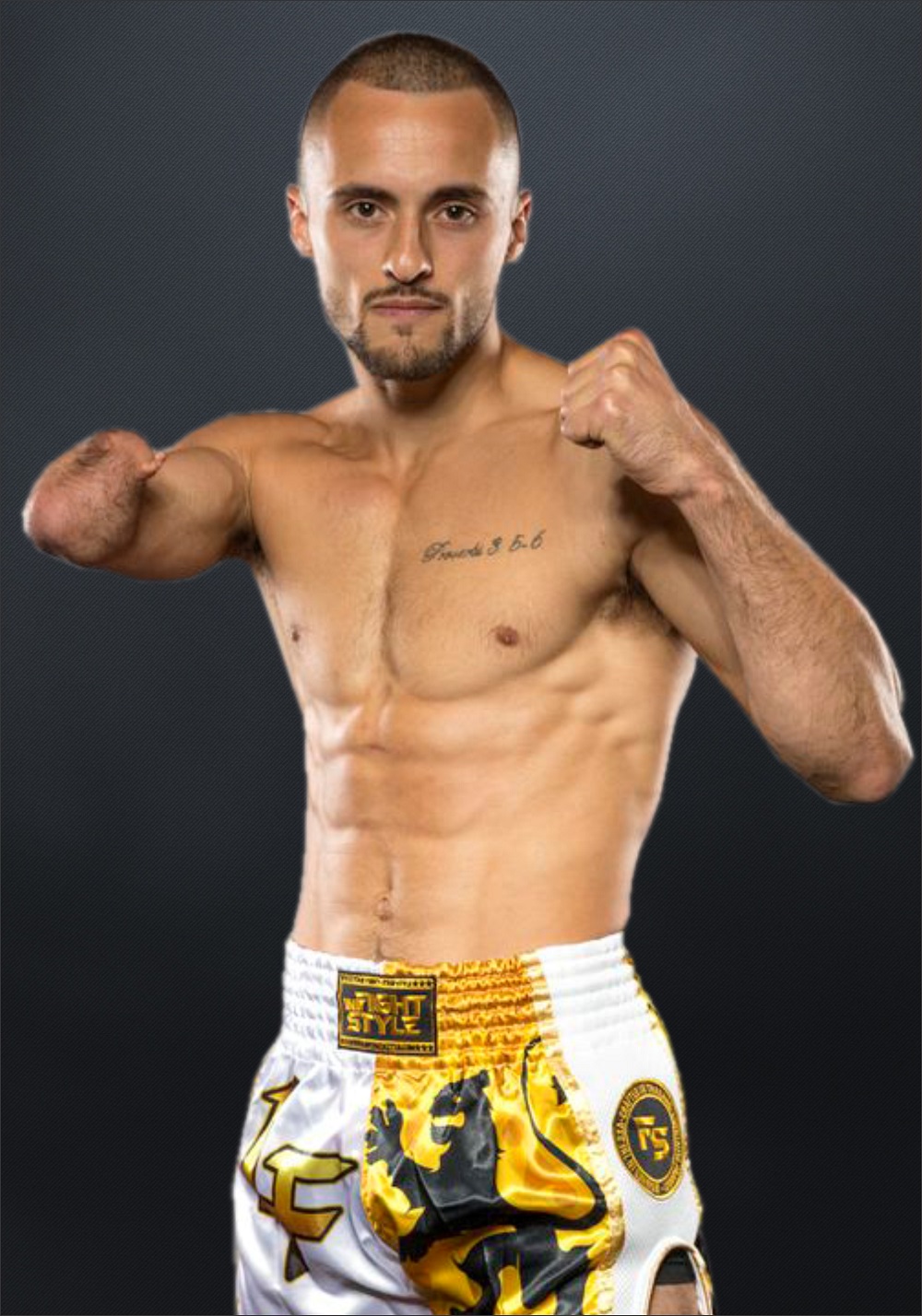 Jake Peacock
Overcoming Adversity, Kickboxer, Inspirational Keynote Speaker
Ratings:
Travels From:
Calgary, Alberta
Language Spoken :
Jake Peacock is a man of influence, devoted Christian, husband, athlete, business owner, and coach born with an unexpected congenital amputation of his right hand. Jake Peacock has learned to work harder, work smarter and think outside the box, and began competing on the national and international circuit and was a ranked competitor in England.

Jake Peacock is a man of influence. He is a devoted Christian, husband, athlete, business owner, and coach. Jake was born and raised in London, England. He was born with an unexpected congenital amputation of his right hand. The amniotic band was wrapped around his arm in the early stages of development, which stopped it from growing. Being a boy with one hand brought constant bullying and stigmatization for Jake. Because of this, Jake’s parents thought it best to put him in Martial Arts to teach himself control, discipline, and self-defense.

Though many see missing a right hand as a disability, Jake does not. He has learned to work harder, work smarter, and think outside the box. Not long after he joined Martial Arts at the age of 7, Jake began competing on the national and international circuit and was a ranked competitor in England.

After moving to Canada at 14, Jake transitioned to full contact, Kyokushin Karate, where he found great success all over the world.  It was after he competed in the World Tournament in Tokyo Japan, that Jake transitioned into Muay Thailand Kickboxing where he gained further experience training, fighting, and coaching.

Jake is now currently signed to the world-famous Muay Thai promotion Lion Fight, under a 5-fight contract. Jake is 3-0 as a professional with all three wins coming by way of KO.  Jake Peacock is also the founder and head coach at Dunamis: Muay Thai |Kickboxing | Boxing based out of Calgary, AB.

Jake is the founder, owner, and head coach of Dunamis Muay Thai, Kickboxing and Boxing in Calgary, AB. Since opening in 2016, Dunamis has grown exponentially and has become home to many high-level fighters. It’s a place that embodies hard work, discipline, and teamwork. Dunamis is known for its welcoming community and strong team mentality.

The 26-year-old from Calgary knocked Mike Taylor down with a flurry of punches and then, when the American got back to his feet, ended it with a head kick just seconds into the bout. “Wow. Wow. Unbelievable … That was incredible,” said the Extreme Cage Fighting NYC announcer.

What can I say? Jake Lee Peacock is a knockout artist.What’s next?

Jake Peacock, born with no right arm, is showing potential in Lion Fight.

Jake Peacock keynote speaker is an expert presenter and has a wide range of experience speaking to a wide variety of audiences and organizations. Jake Peacock delivers keynotes, workshops & training sessions. They may also host or emcee events. Hire Jake Peacock from Calgary, Alberta for your event to inspire the audience to take action and make change in their work and their lives. Your workplace will benefit from our keynote speaker and their keynote talks and speeches will shift the mindsets or behaviours for the audience members in Canada.

Are you looking to hire Jake Peacock for your event? Jake Peacock Calgary, Alberta is a dynamic and engaging speaker that offers audiences researched content paired with expertise and a dynamic speaking ability. Jake Peacock is also a Canadian corporate consultant and coach and facilitates workshops and training sessions for a corporate audience. Jake Peacock is an expert keynote presenter and speaks on wide variety of topics. Hiring a great speaker for your event is important and working with a thought leader like Jake Peacock from Speakers Canada’s roster will engage audiences into the content of the presentation to bring awareness and a fresh perspective for their approach to their work and their lives. Book Jake Peacock to educate, motivate and activate the audience through an interactive and entertaining presentation at corporate meetings and gatherings.

Known as a popular key note speaker in Canada, Jake Peacock creates life changing experiences for the participants with practical insights and strategic advice they can implement right after the session. Working with a one our leading expert speaker like Jake Peacock from Calgary, Alberta offers organizations a fresh perspective to assist the people of the organization. No matter if it is a government, association, or business crowd, Jake Peacock is a perfect speaker for your event. Through unique practical insights for trending topics and years experience speaking to different organizations, Jake Peacock focuses on changing individuals to make better decisions at work and their lives. No matter if you are holding an in person or virtual event, having an influential speaker such as Jake Peacock will engage, motivate, and activate the audience to make a change in their lives and inspire action for results to meet organizational goals. Your workforce will benefit from Jake Peacock’s presentations and speeches, with measurable results set to shift the people of the organization and core direction of the company. Book Jake Peacock speaker for your annual general meeting, conference, summit, or convention in Canada.

HOW MUCH DOES IT COST TO BOOK Jake Peacock FOR A VIRTUAL OR KEYNOTE PRESENTATION?

Jake Peacock is an expert professional key note speaker with a lot of experience speaking and delivering engaging talks to organizations and audiences in Canada. Each of Speaker Bureau Canada’s talent have different ways to assess their fees, and Jake Peacock speaker fee ranges depending on the size of the audience, event format (in person or virtual), event location, and if the organization booking them is a non profit, association, government department/government agency or business/corporation. The speakers we work with are flexible with their fees, and it is important for us to learn more about your event before we approach them, as it is our role to work for you, and to help you find a speaker within budget.

Please contact Speakers Bureau of Canada and provide us with your event details so that we can contact Jake Peacock to check availability or confirm the pricing and associated costs to hire a great speaker like Jake Peacock for your event. As Jake Peacock's agent and as a Canadian top speaker bureau and talent agency for speakers, we are able to propose each event opportunity from each host organization’s behalf to try to help you get in touch with Jake Peacock and confirm them for your in person or online meeting/event. We can also provide and advise on the booking process and potentially negotiate their fee. Speakers Canada is a client focused speaker agency, and we work for you in finding good speakers for your team meetings and booking processes.

Speakers Bureau Canada assists companies and event planning teams seeking to hire talent like Jake Peacock for speaking engagements, virtual meetings, conference appearances, training sessions and workshops facilitations. Our Canadian speakers bureau does not claim to exclusively represent Jake Peacock, however they are represented by Speakers Canada, and we work with them closely for their Canadian speaking opportunities and bookings. As Canada’s top speaker bureau, we represent Canadian motivational keynote speakers and professional guest speakers that will be available on your upcoming events date and location that are withing the budget. Our talented bureau speaker booking agency can help find business speakers or celebrity speakers that aligns with each organization, audience, event theme and the topic themes you hope for the speaker to address in their presentation.

When SBC receives a request to book Jake Peacock we provide you with their speaker fees, travel costs and check their schedules. We work closely with the host organization’s event planning team and the speaker to handle the logistics and to relay or negotiate associated costs. Our talented team members then will work with our talent directly or their agent/manager/assistant to confirm the Canadian speaker fee and travel expenses, so that event planning teams can receive an official quote for the speaker appearing at the event. Speaker fees and travel costs vary per speaker and our role is to contact Jake Peacock about your event, after we have connected with the event organizers to learn all the event details and/or conference program. Each booking request is unique since session durations and audience sizes can vary which may affect the speaker’s fees. If you are looking to hire Jake Peacock, we recommend filling out the booking request form so a booking agent from Speakers Bureau Canada can get in touch with our talent to help you coordinate with your team to engage the speaker for a successful event.