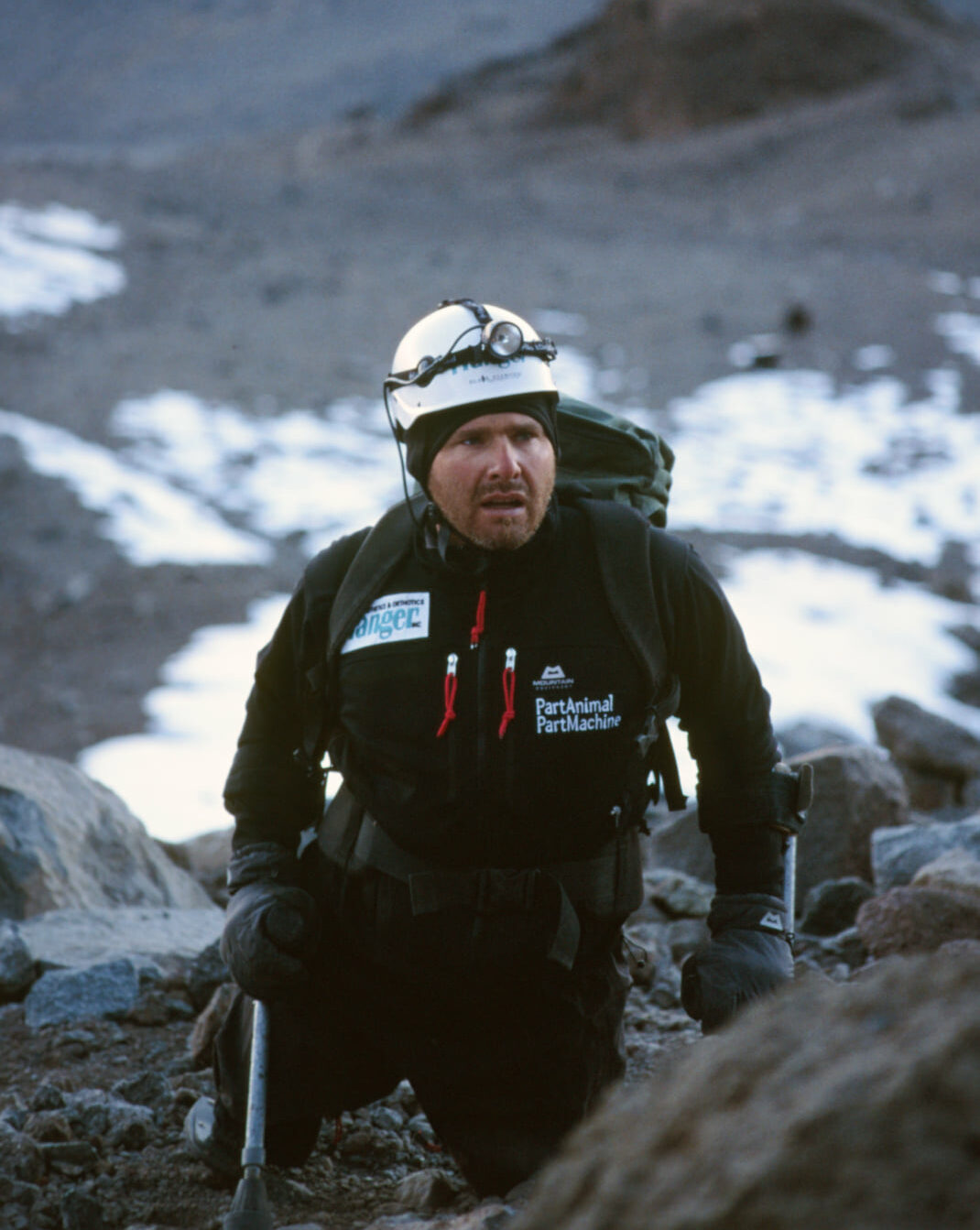 Warren Macdonald works with innovative, forward-thinking organizations and associations looking to foster a shift in perception. Warren’s life’s boundaries were redefined in April 1997 with his accident on Hinchinbrook Island, Queensland, Australia. Climbing to the Island’s tallest peak, Warren became trapped beneath a one-ton slab boulder in a freak rock fall. Two days later he was rescued, only to undergo the amputation of both legs at mid-thigh. Warren shouldn’t be alive today and although went through a large transition as an abled mountain climber to becoming wheelchair bound he is an individual that was able to move through challenging times in the face of uncertainty to regain his mental strength and determination to find a way to his passion to climb mountains once again.

Macdonald not only decided that his injuries wouldn’t slow him down―he decided they would propel him to new heights. Just ten months after the incident, Warren climbed Tasmania’s Cradle Mountain and later summited both Mount Kilimanjaro and El Capitan. He is also the only above-knee amputee to make an ascent of Canada’s landmark frozen waterfall, the 600 ft. “Weeping Wall” in Alberta. Inspiring audiences to turn challenge into change, Warren’s talks foster the desire to seek opportunities and push their own limits to overcome obstacles and maximize their performance. Warren Macdonald has literally climbed over obstacles most people cannot imagine.

Warren Macdonald’s first book, A Test of Will is an Australian bestseller and the subject of the “Trapped under a Boulder” episode of the Discovery Channel series “I Shouldn’t Be Alive”. His film, “The Second Step”, documented the epic four-week journey to Federation Peak, Australia’s most challenging mountain summit. The film has been acclaimed worldwide, screening on National Geographic Television and winning eight international awards including Grand Prize at the prestigious Banff Mountain Film Festival.

Warren Macdonald has appeared on numerous news and current affairs programs, including Larry King Live, The Oprah Winfrey Show, and The Hour with George Stroumboulopoulos. He has written articles for CNN World Edition, Australian Geographic, Speaking of Impact and Professional Speaker. As a speaker, Warren’s clients include PepsiCo, Blackberry/Marketstar, HSBC, Sun Life Financial, Suncor, Novo Nordisk, among many others. In 2013, he spoke at TEDx Ajman “No Strings Attached” in the UAE.

Warren is a visionary who lives and breathes change management every day. He is routinely sought out as a keynote speaker and motivator by innovative, forward thinking organizations that require new inspiration to see the possibilities through hard work, dedication and “out of the box” thinking. A powerful catalyst for change, Warren’s life changing presentation challenges the status quo by telling audiences what they need hear at the right time to help spark new thinking to change their behaviours and their approach to their careers & lives.

The Power of Perception - Building a Breakthrough Mindset

Return on Resilience - Bouncing Back is just the Beginning

The Challenge of Change - Finding Opportunity in Adversity

One Step Beyond - Setting and Reaching Impossible Goals

Next Level Quality of Care: A Patients Perspective

Over the past 32 years, we have hired hundreds of speakers around the globe; many considered to be best of the best. Personally, for me, Warren’s Story is beyond compare. But it is in meeting this man, and how every time I see him or speak to him, he has an attitude that is always positive and exciting. I would place Warren in the Top 10 in the World for Motivational speaking, and we have had Presidents, Mayors, actors, activists, political and religious leaders, and everyone in between.

Warren Macdonald keynote speaker is an expert presenter and has a wide range of experience speaking to a wide variety of audiences and organizations. Warren Macdonald delivers keynotes, workshops & training sessions. They may also host or emcee events. Hire Warren Macdonald from Canmore, Alberta for your event to inspire the audience to take action and make change in their work and their lives. Your workplace will benefit from our keynote speaker and their keynote talks and speeches will shift the mindsets or behaviours for the audience members in Canada.

Known as a popular key note speaker in Canada, Warren Macdonald creates life changing experiences for the participants with practical insights and strategic advice they can implement right after the session. Working with a one our leading expert speaker like Warren Macdonald from Canmore, Alberta offers organizations a fresh perspective to assist the people of the organization. No matter if it is a government, association, or business crowd, Warren Macdonald is a perfect speaker for your event. Through unique practical insights for trending topics and years experience speaking to different organizations, Warren Macdonald focuses on changing individuals to make better decisions at work and their lives. No matter if you are holding an in person or virtual event, having an influential speaker such as Warren Macdonald will engage, motivate, and activate the audience to make a change in their lives and inspire action for results to meet organizational goals. Your workforce will benefit from Warren Macdonald’s presentations and speeches, with measurable results set to shift the people of the organization and core direction of the company. Book Warren Macdonald speaker for your annual general meeting, conference, summit, or convention in Canada.

HOW MUCH DOES IT COST TO BOOK Warren Macdonald FOR A VIRTUAL OR KEYNOTE PRESENTATION?

Warren Macdonald is an expert professional key note speaker with a lot of experience speaking and delivering engaging talks to organizations and audiences in Canada. Each of Speaker Bureau Canada’s talent have different ways to assess their fees, and Warren Macdonald speaker fee ranges depending on the size of the audience, event format (in person or virtual), event location, and if the organization booking them is a non profit, association, government department/government agency or business/corporation. The speakers we work with are flexible with their fees, and it is important for us to learn more about your event before we approach them, as it is our role to work for you, and to help you find a speaker within budget.

Please contact Speakers Bureau of Canada and provide us with your event details so that we can contact Warren Macdonald to check availability or confirm the pricing and associated costs to hire a great speaker like Warren Macdonald for your event. As Warren Macdonald's agent and as a Canadian top speaker bureau and talent agency for speakers, we are able to propose each event opportunity from each host organization’s behalf to try to help you get in touch with Warren Macdonald and confirm them for your in person or online meeting/event. We can also provide and advise on the booking process and potentially negotiate their fee. Speakers Canada is a client focused speaker agency, and we work for you in finding good speakers for your team meetings and booking processes.

Speakers Bureau Canada assists companies and event planning teams seeking to hire talent like Warren Macdonald for speaking engagements, virtual meetings, conference appearances, training sessions and workshops facilitations. Our Canadian speakers bureau does not claim to exclusively represent Warren Macdonald, however they are represented by Speakers Canada, and we work with them closely for their Canadian speaking opportunities and bookings. As Canada’s top speaker bureau, we represent Canadian motivational keynote speakers and professional guest speakers that will be available on your upcoming events date and location that are withing the budget. Our talented bureau speaker booking agency can help find business speakers or celebrity speakers that aligns with each organization, audience, event theme and the topic themes you hope for the speaker to address in their presentation.

When SBC receives a request to book Warren Macdonald we provide you with their speaker fees, travel costs and check their schedules. We work closely with the host organization’s event planning team and the speaker to handle the logistics and to relay or negotiate associated costs. Our talented team members then will work with our talent directly or their agent/manager/assistant to confirm the Canadian speaker fee and travel expenses, so that event planning teams can receive an official quote for the speaker appearing at the event. Speaker fees and travel costs vary per speaker and our role is to contact Warren Macdonald about your event, after we have connected with the event organizers to learn all the event details and/or conference program. Each booking request is unique since session durations and audience sizes can vary which may affect the speaker’s fees. If you are looking to hire Warren Macdonald, we recommend filling out the booking request form so a booking agent from Speakers Bureau Canada can get in touch with our talent to help you coordinate with your team to engage the speaker for a successful event.