The Spring 2017 issue of the University of Alberta’s Alumni Magazine, New Trail, features contributing editors, Dr. Patricia Makokis and her daughter and lawyer,  Janice Makokis on the subject of The Truth and Reconciliation Commission (TRC). 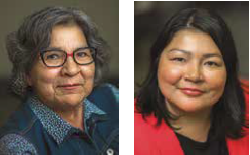 Together they ask readers to face the Truth. More than 150,000 Indigenous children were forcibly removed from their families commencing at the tender age of five or six from 1860 to 1960.  Many children suffered through physical, sexual and mental abuse. They were stripped of their parents, culture and way of life. God knows how many children died in these schools.  At least 3,200 deaths were recorded but many more were never reported dead. The bodies of dead children were not returned to their parents because it was deemed “too expensive”.

Children were forced to eat rancid food, scraps left over from the meals of priests and nuns and then sometimes forced to eat the vomit from having to choke down that food.

The Government wanted to “civilize” themand religious groups wanted to “save” them.  It is Canada’s gravest injustice. It was a process of systematic domination and rehumanization of the Indigenous population of Canada.

What Dr. Patricia and Janice offer the readers are the ways and means that Reconciliation. The TRC has 94 Calls to Action . They apply to every Canadian and every Indigenous person in Canada.

To the Makokis’, the key answer to Reconciliation lies in education. White people need to change their attitudes about colonialism and become partners with Indigenous people. They also need to make amends and to progress from there.  Remnants of colonial attitudes still exist today. Boil-water advisories on many reserves, inferior education and health care systems, high suicide rates and diseases still plague Indigenous people in Canada today.

Indigenous people must learn too. They must become re-acquainted with their beliefs, their traditions, their language and ceremonies. They need to know what happened, so they can understand why they are the way they are today. They need to comprehend that to an Indigenous person, land, language, culture and identify are inseparable from spirituality.

Canadians everywhere need to work together to learn more about each other and move on.

PROMOTE THE EVENT ON SOCIAL MEDIA TO RAISE ATTENDANCE

HOW TO PLAN A SUCCESSFUL EVENT: CORPORATE EVENTS & CONFERENCES

WHAT IS THE PURPOSE OF A KEYNOTE SPEAKER: WHY HIRE ONE?

ADDITIONAL VALUE FOR YOUR INVESTMENT: SPEAKERS BOOKS AND ONLINE TRAINING

← PREVIOUS : Andrea Holwegner Won The Peanut Bureau of Canada Award For Her Recipe Of a Cocoa Bar NEXT : The Truth and Reconciliation Commission →