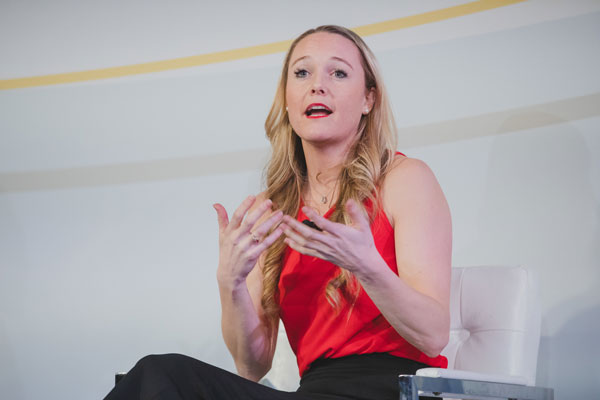 Sarah Wells
SPEAKER. ATHLETE. FOUNDER.
Ratings:
Travels From:
Toronto, Ontario
Language Spoken :
Sarah Wells is an Olympic semi-finalist and Pan Am Games silver medalist in the 400m hurdles, known for overcoming challenges and achieving the “impossible”. Sarah Wells is also the founder of the Believe Initiative, a youth organization that inspires students to build resilience and self-belief through guided programming.

Olympian Sarah Wells is no stranger to overcoming obstacles. As an Olympic semi-finalist and Pan Am Games silver medalist in the 400m hurdles, Sarah’s reputation was built through overcoming challenges and achieving the “impossible”.

Before finding the sport of track and field, Sarah was cut from every high school team she tried out for. It was thanks to a teacher who suggested she try running – that teacher believed in her before Sarah ever did. Together, that teacher and her became coach and athlete and made the Olympics just a decade later.

Sarah recognizes not everyone is going to have that “teacher” or person in their lives, who believes in them, so the Believe Initiative was created to be that person for as many people as possible.

Ever since Sarah was a child she has always loved to run. Whether it was around the park, at the cottage or during a soccer game, Sarah was running. Little did she know this simple activity would become the center of her biggest dream.

Sarah Wells grew up playing many sports, from ice hockey and curling to baseball and soccer. But it was her high school teacher, Dave Hunt, who also happened to be a National Team coach that recognized her talent and encouraged her to pursue track and field more seriously. Sarah quickly fell in love with hurdles and her Olympic journey would unknowingly begin.

When Sarah graduated High School, she chose to attend the University of Toronto Faculty of Physical Education and Kinesiology to continue her education as well as continue to work with coach Dave. Within their 8 years working together, Sarah became a 3-time National Champion and 5-time National Team member and represented Canada in multiple World Youth, World Junior and Pan American Junior Championships.

In 2011, the year before the Olympics, Sarah Wells was unfortunately diagnosed with a stress fracture in her left femur (thigh bone), which tragically sidelined her for 9 months. With the Olympic year fast approaching, Sarah was eager to get back on the track following a gruelling recovery and rehabilitation program. When she was finally cleared to run, the London Olympics were only 8 months away and few people believed Sarah would be able to overcome such a devastating injury and ultimately compete in the Olympic Games. However, Sarah surrounded herself with an integrated team of physicians, coaches, family, and friends, enabling her to train, perform, and remain realistic about a seemingly impossible dream.

Fortunately, through hard work, perseverance and an unwavering belief in herself, Sarah Wells ran Olympic standard, won the Canadian championships, and was named to the 2012 Canadian Olympic team. At the games, Sarah made it through the heats to the Olympic semi-final round. She placed herself in the top 24 in the world and was one of the youngest competitors in the field.

Since those games, Sarah has added to her National Championship Gold medal count and most recently won a silver and bronze medal at the Pan American Games in Toronto.

When Sarah isn’t travelling North America to speak or the world to compete, she resides in Toronto, Ontario.

WE'RE ALL IN A RACE

Sarah is a force on stage. I was riveted, reflective, and inspired to take action.

Sarah is an inspiration to not only athletes, but to all of us overcoming life’s obstacles. Her motto “Believe” is something we should all remember in those challenging moments. Thank you Sarah, you are an inspiration.

It was a delight to have you inspire my key business partners in fall of 2015. You were able to effectively connect with this group of Investment Advisors drawing from your experiences on and off the track. The parallels drawn between high performance sport and high performance living made an impact on everyone in the room. Your warm smile, infectious energy and the depth of your story kept everyone engaged and left us motivated and determined.

Sarah came to speak to my Sport Nutrition and Exercise Prescription for Sport class this semester at George Brown College. When word got out around the college that Sarah was coming, the entire Fitness and Wellness program, including faculty, showed up for her talk. Everyone was so impressed by her belief in herself, tenacity and journey to the Olympics. Sarah also touched on her nutrition, training and the biomechanics of running to gear the talk to what the students were learning in class. Sarah is an inspirational person and an amazing speaker and I would definitely recommend her for speaking engagements!

Sarah had the audience connected to her quickly and kept them engaged throughout. Her story is adaptable to the key experiences all of us have as we face challenges. Since we were focusing on Mental Health – specifically Resiliency – her message was both entertaining and pertinent. Having seen her before, we knew she would be a perfect match for the conference theme.

Sarah Wells keynote speaker is an expert presenter and has a wide range of experience speaking to a wide variety of audiences and organizations. Sarah Wells delivers keynotes, workshops & training sessions. They may also host or emcee events. Hire Sarah Wells from Toronto, Ontario for your event to inspire the audience to take action and make change in their work and their lives. Your workplace will benefit from our keynote speaker and their keynote talks and speeches will shift the mindsets or behaviours for the audience members in Canada.

Are you looking to hire Sarah Wells for your event? Sarah Wells Toronto, Ontario is a dynamic and engaging speaker that offers audiences researched content paired with expertise and a dynamic speaking ability. Sarah Wells is also a Canadian corporate consultant and coach and facilitates workshops and training sessions for a corporate audience. Sarah Wells is an expert keynote presenter and speaks on wide variety of topics. Hiring a great speaker for your event is important and working with a thought leader like Sarah Wells from Speakers Canada’s roster will engage audiences into the content of the presentation to bring awareness and a fresh perspective for their approach to their work and their lives. Book Sarah Wells to educate, motivate and activate the audience through an interactive and entertaining presentation at corporate meetings and gatherings.

Known as a popular key note speaker in Canada, Sarah Wells creates life changing experiences for the participants with practical insights and strategic advice they can implement right after the session. Working with a one our leading expert speaker like Sarah Wells from Toronto, Ontario offers organizations a fresh perspective to assist the people of the organization. No matter if it is a government, association, or business crowd, Sarah Wells is a perfect speaker for your event. Through unique practical insights for trending topics and years experience speaking to different organizations, Sarah Wells focuses on changing individuals to make better decisions at work and their lives. No matter if you are holding an in person or virtual event, having an influential speaker such as Sarah Wells will engage, motivate, and activate the audience to make a change in their lives and inspire action for results to meet organizational goals. Your workforce will benefit from Sarah Wells’s presentations and speeches, with measurable results set to shift the people of the organization and core direction of the company. Book Sarah Wells speaker for your annual general meeting, conference, summit, or convention in Canada.

HOW MUCH DOES IT COST TO BOOK Sarah Wells FOR A VIRTUAL OR KEYNOTE PRESENTATION?

Sarah Wells is an expert professional key note speaker with a lot of experience speaking and delivering engaging talks to organizations and audiences in Canada. Each of Speaker Bureau Canada’s talent have different ways to assess their fees, and Sarah Wells speaker fee ranges depending on the size of the audience, event format (in person or virtual), event location, and if the organization booking them is a non profit, association, government department/government agency or business/corporation. The speakers we work with are flexible with their fees, and it is important for us to learn more about your event before we approach them, as it is our role to work for you, and to help you find a speaker within budget.

Please contact Speakers Bureau of Canada and provide us with your event details so that we can contact Sarah Wells to check availability or confirm the pricing and associated costs to hire a great speaker like Sarah Wells for your event. As Sarah Wells's agent and as a Canadian top speaker bureau and talent agency for speakers, we are able to propose each event opportunity from each host organization’s behalf to try to help you get in touch with Sarah Wells and confirm them for your in person or online meeting/event. We can also provide and advise on the booking process and potentially negotiate their fee. Speakers Canada is a client focused speaker agency, and we work for you in finding good speakers for your team meetings and booking processes.

Speakers Bureau Canada assists companies and event planning teams seeking to hire talent like Sarah Wells for speaking engagements, virtual meetings, conference appearances, training sessions and workshops facilitations. Our Canadian speakers bureau does not claim to exclusively represent Sarah Wells, however they are represented by Speakers Canada, and we work with them closely for their Canadian speaking opportunities and bookings. As Canada’s top speaker bureau, we represent Canadian motivational keynote speakers and professional guest speakers that will be available on your upcoming events date and location that are withing the budget. Our talented bureau speaker booking agency can help find business speakers or celebrity speakers that aligns with each organization, audience, event theme and the topic themes you hope for the speaker to address in their presentation.

When SBC receives a request to book Sarah Wells we provide you with their speaker fees, travel costs and check their schedules. We work closely with the host organization’s event planning team and the speaker to handle the logistics and to relay or negotiate associated costs. Our talented team members then will work with our talent directly or their agent/manager/assistant to confirm the Canadian speaker fee and travel expenses, so that event planning teams can receive an official quote for the speaker appearing at the event. Speaker fees and travel costs vary per speaker and our role is to contact Sarah Wells about your event, after we have connected with the event organizers to learn all the event details and/or conference program. Each booking request is unique since session durations and audience sizes can vary which may affect the speaker’s fees. If you are looking to hire Sarah Wells, we recommend filling out the booking request form so a booking agent from Speakers Bureau Canada can get in touch with our talent to help you coordinate with your team to engage the speaker for a successful event.