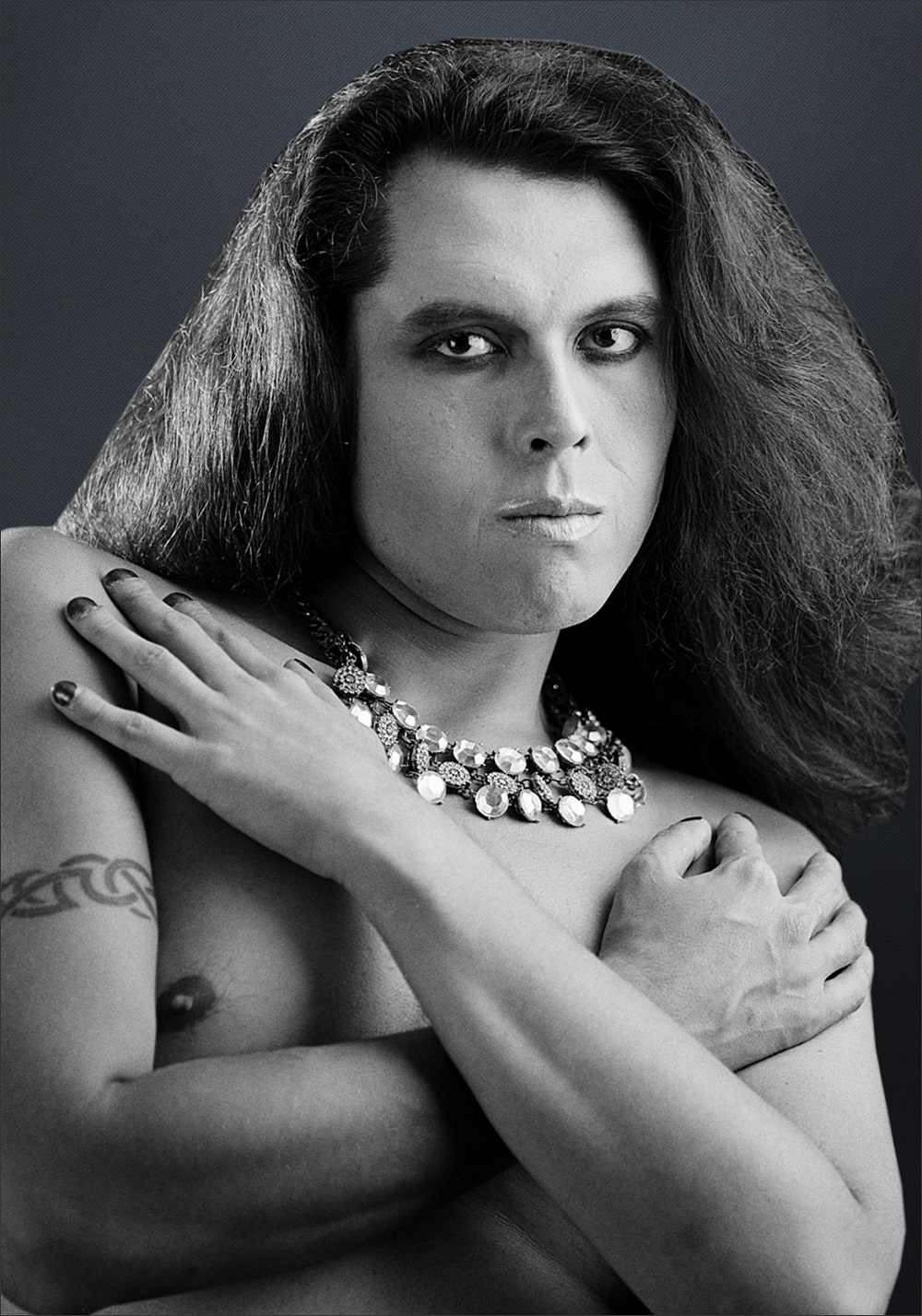 Teddy Syrette (Ozhawa Anung Kwe/Yellow Star Woman) is a 2-Spirit Anishnabe from Rankin Reserve of Batchewana First Nation of the Anishnabek. Teddy has a background in social justice for First Nation and 2-Spirit and LGBTQ+ people and communities. Their background also includes community theatre and bingo. Teddy has a Diploma in Social Service Work – Indigenous Specialization from Sault College. Teddy Syrette uses they/them as their pronouns. As a brown, First Nation queer person, there were many barriers and challenges that Teddy faced growing up on Rankin Reserve and Sault Ste. Marie. These acts of discrimination and bullying, led Teddy Syrette to a path of self destruction and isolation. However, they did manage to find support in a high school guidance counsellor, an LGBT+ youth group of Algoma and affirming family and friends.

This didn’t stop Teddy from experiencing different forms of addiction, mental illness and ultimately dropping out of high school several times. At a young age, Teddy showed a creative imagination, brought on by their love of reading, writing and television and film. Not knowing what being First Nation entirely meant, Teddy did understand they were different after developing a crush on Zach Morris, from the television show Saved by the Bell. Teddy would become involved in theatre in elementary school, musical theatre in their later teen years, then Indigenous and community theatre in their 20’s.

While studying Indigenous theatre and storytelling at Debajehmujig Storytellers in Manitowaning ON, on Manitoulin Island, Teddy Syrette discovered that his grandmother was a residential school survivor from St. Joseph Residential School in Spanish, Ontario. Teddy also discovered that his uncle and aunt also attended residential school, but unfortunately, Teddy’s aunty would die of tuberculous at residential school. This would set Teddy on a healing journey for their mental health and addiction. Teddy is now 4 years sober from alcohol. Their fondness for news and media, shifted their journey in their mid twenties, from being a performing artist to social justice and social advocacy.

At 24, they dropped out of theatre school in Manitoulin Island, and returned to Sault Ste. Marie enrolled and graduated from the Sault College Social Service Worker – Indigenous Specialization program. Teddy Syrette would then get involved with an LGBTQ+ youth committee with the former Provincial Advocates Office of Ontario, and assist with revamping the Sault Pride movement in Sault Ste. Marie, ON.

Teddy has received the following awards for their work in advocacy, which include the Mark S. Bonham Award for Sexuality, Planned Parenthood Toronto LGBTQ+ Person of the year, the Sault Ste. Marie YMCA Peace Medal, the Community Driven Award for Leadership and the Grade 8 Graduate Award for Geography and History. Teddy currently lives back in Sault Ste. Marie, their home territory of Baawaating with their pug Hortus.

A Journey in Rainbow Moccasins

I have had the privilege of hearing Teddy speak on a number of occasions, most recently at our 2021 national conference when she spoke on the impact of colonialism on 2Spirit and queer-trans Indigenous people. Teddy is a highly knowledgeable and passionate storyteller, and I would recommend him without reservation.

Teddy Syrette brings together storytelling and knowledge sharing in their facilitation approach, creating an engaging space for learning. They offer impactful experiences for learners through their critical, forward-thinking analysis, and lots of humour, too. Teddy has significant experience working with audiences of all backgrounds, and has contributed meaningfully to increasing awareness within and across communities in relation to the experiences of two spirit, queer and trans people in Indigenous communities. Teddy helps individuals involved in organizations and programs of all kinds to better understand ways of supporting two spirit, Indigenous queer and trans community members, while also providing important connections to existing programs and supports. Teddy is also focused on expanding the supports available in communities, especially in northern Ontario, through facilitating relationship building and resource sharing.

Over the past five years, Teddy has spoken numerous times in the SHAE program in Hamilton. In each and every one of these times, he has left an impression on Indigenous youth and has made them feel welcomed and engaged and ready to work in order to make the community better. He educates with both grace and humour and engages all of the audience in understanding 2SLGTBTQ+ challenges but also their beautiful realities. For a group of young people to say “when is he coming back?” means to me that he’s ignited in them a spark to not only learn more but that they had fun while doing it.

I have had the pleasure working with Teddy many times over the past several years for conferences on Indigenous Health and Wellness. As a keynote speaker, workshop presenter and MC (Mistress of Ceremonies). They have a stage presence, energy and accountabilty to the work contracted for. Some words that come to mind on their work; real, honest, and hard hitting. They have the ability to read the room while covering some uncomfortable truths and harder topics by adding in humor or a moment for participants to digest the information and closing in a good way. It’s been an absolute pleasure working with Teddy and I highly recommend them and the work they do.

Teddy facilitated a workshop for several high school classes at my school. He was engaging and informed. He taught the students a lot of new things about intersecting identities and how that can impact individuals. The students enjoyed his workshop and learned a lot from him. Their reflection and growth was visible.

Teddy Syrette has been an incredible resource to us at Planned Parenthood Toronto, providing training for staff and for many groups of our volunteers on Two Spirit identities and gender sexuality diversity in Indigenous experiences and histories. In recognition of their advocacy and community building for Two Spirit and LGBTQ+ communities, we were delighted to honour Teddy with a PPT Choice Award in 2019.

Teddy Syrette keynote speaker is an expert presenter and has a wide range of experience speaking to a wide variety of audiences and organizations. Teddy Syrette delivers keynotes, workshops & training sessions. They may also host or emcee events. Hire Teddy Syrette from Sault Ste. Marie, Ontario for your event to inspire the audience to take action and make change in their work and their lives. Your workplace will benefit from our keynote speaker and their keynote talks and speeches will shift the mindsets or behaviours for the audience members in Canada.

Are you looking to hire Teddy Syrette for your event? Teddy Syrette Sault Ste. Marie, Ontario is a dynamic and engaging speaker that offers audiences researched content paired with expertise and a dynamic speaking ability. Teddy Syrette is also a Canadian corporate consultant and coach and facilitates workshops and training sessions for a corporate audience. Teddy Syrette is an expert keynote presenter and speaks on wide variety of topics. Hiring a great speaker for your event is important and working with a thought leader like Teddy Syrette from Speakers Canada’s roster will engage audiences into the content of the presentation to bring awareness and a fresh perspective for their approach to their work and their lives. Book Teddy Syrette to educate, motivate and activate the audience through an interactive and entertaining presentation at corporate meetings and gatherings.

Known as a popular key note speaker in Canada, Teddy Syrette creates life changing experiences for the participants with practical insights and strategic advice they can implement right after the session. Working with a one our leading expert speaker like Teddy Syrette from Sault Ste. Marie, Ontario offers organizations a fresh perspective to assist the people of the organization. No matter if it is a government, association, or business crowd, Teddy Syrette is a perfect speaker for your event. Through unique practical insights for trending topics and years experience speaking to different organizations, Teddy Syrette focuses on changing individuals to make better decisions at work and their lives. No matter if you are holding an in person or virtual event, having an influential speaker such as Teddy Syrette will engage, motivate, and activate the audience to make a change in their lives and inspire action for results to meet organizational goals. Your workforce will benefit from Teddy Syrette’s presentations and speeches, with measurable results set to shift the people of the organization and core direction of the company. Book Teddy Syrette speaker for your annual general meeting, conference, summit, or convention in Canada.

HOW MUCH DOES IT COST TO BOOK Teddy Syrette FOR A VIRTUAL OR KEYNOTE PRESENTATION?

Teddy Syrette is an expert professional key note speaker with a lot of experience speaking and delivering engaging talks to organizations and audiences in Canada. Each of Speaker Bureau Canada’s talent have different ways to assess their fees, and Teddy Syrette speaker fee ranges depending on the size of the audience, event format (in person or virtual), event location, and if the organization booking them is a non profit, association, government department/government agency or business/corporation. The speakers we work with are flexible with their fees, and it is important for us to learn more about your event before we approach them, as it is our role to work for you, and to help you find a speaker within budget.

Please contact Speakers Bureau of Canada and provide us with your event details so that we can contact Teddy Syrette to check availability or confirm the pricing and associated costs to hire a great speaker like Teddy Syrette for your event. As Teddy Syrette's agent and as a Canadian top speaker bureau and talent agency for speakers, we are able to propose each event opportunity from each host organization’s behalf to try to help you get in touch with Teddy Syrette and confirm them for your in person or online meeting/event. We can also provide and advise on the booking process and potentially negotiate their fee. Speakers Canada is a client focused speaker agency, and we work for you in finding good speakers for your team meetings and booking processes.

Speakers Bureau Canada assists companies and event planning teams seeking to hire talent like Teddy Syrette for speaking engagements, virtual meetings, conference appearances, training sessions and workshops facilitations. Our Canadian speakers bureau does not claim to exclusively represent Teddy Syrette, however they are represented by Speakers Canada, and we work with them closely for their Canadian speaking opportunities and bookings. As Canada’s top speaker bureau, we represent Canadian motivational keynote speakers and professional guest speakers that will be available on your upcoming events date and location that are withing the budget. Our talented bureau speaker booking agency can help find business speakers or celebrity speakers that aligns with each organization, audience, event theme and the topic themes you hope for the speaker to address in their presentation.

When SBC receives a request to book Teddy Syrette we provide you with their speaker fees, travel costs and check their schedules. We work closely with the host organization’s event planning team and the speaker to handle the logistics and to relay or negotiate associated costs. Our talented team members then will work with our talent directly or their agent/manager/assistant to confirm the Canadian speaker fee and travel expenses, so that event planning teams can receive an official quote for the speaker appearing at the event. Speaker fees and travel costs vary per speaker and our role is to contact Teddy Syrette about your event, after we have connected with the event organizers to learn all the event details and/or conference program. Each booking request is unique since session durations and audience sizes can vary which may affect the speaker’s fees. If you are looking to hire Teddy Syrette, we recommend filling out the booking request form so a booking agent from Speakers Bureau Canada can get in touch with our talent to help you coordinate with your team to engage the speaker for a successful event.