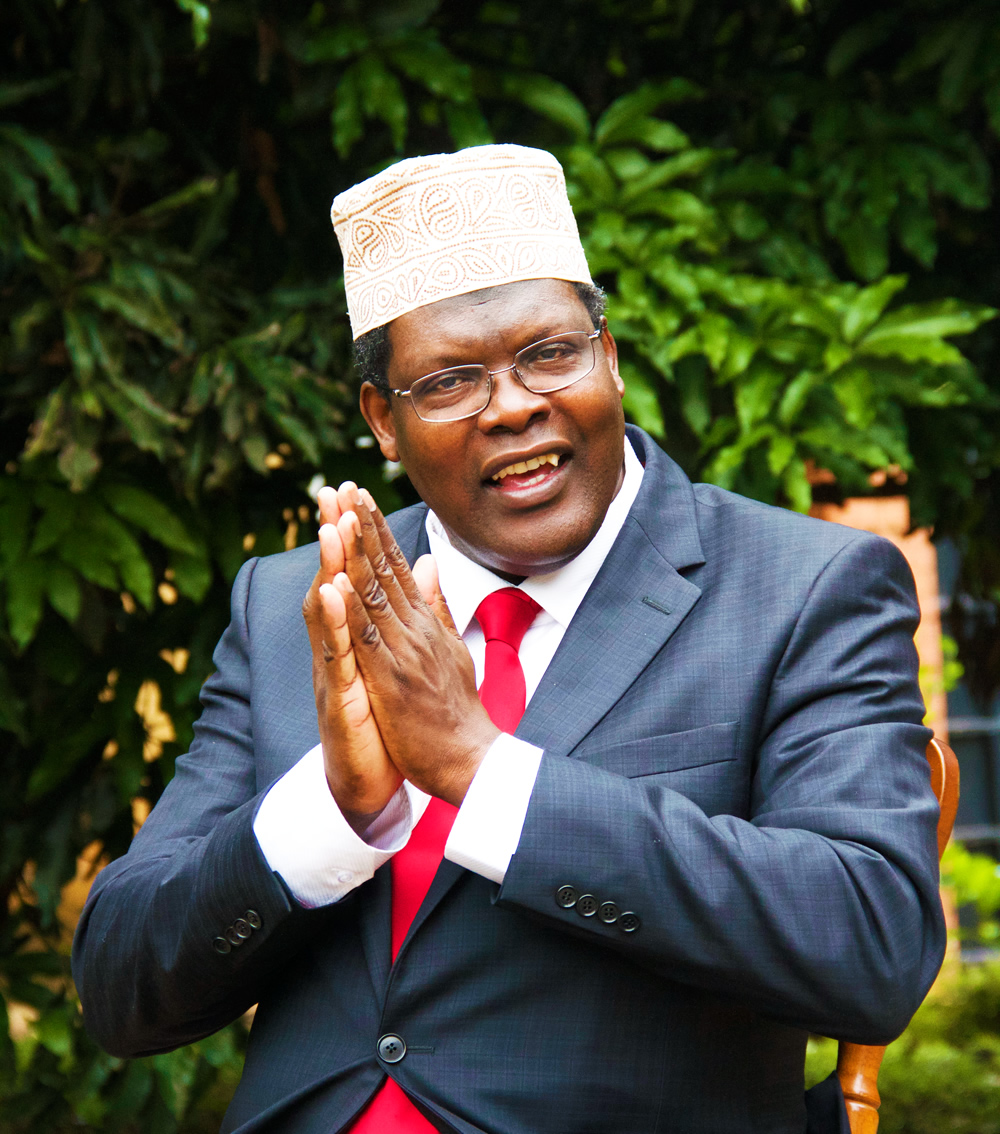 Dr. Miguna Miguna
Lawyer, Human Rights Advocate & Political Activist
Ratings:
Travels From:
Toronto, Ontario
Language Spoken :
Miguna Miguna is a keynote speaker, human rights advocate & social justice activist, specializing in socio-political affairs, racial equality & discrimination. Dr. Miguna Miguna was an advocate of the High Court of Kenya and also served as a senior adviser to former Kenyan Prime Minister Raila Odinga from 2009 to 2012. He has practiced law as an attorney, a barrister and solicitor in Ontario, Canada for over 27 years.

Dr. Miguna Miguna has practiced law in Ontario for more than 27 years in the areas of human rights, civil litigation, immigration, and criminal and constitutional law. Miguna overcame childhood grinding poverty and deprivations in Kenya where he was born and grew up. He managed to become a prominent student leader at the University of Nairobi from August 1986 to November 1987. However, his pro-democracy activism resulted in his detention without trial and expulsion from the university before he fled into exile and was granted asylum in Canada in 1988.

Between 1989-1994, he was the Coordinator of the Committee for Democracy in Kenya (CDK), an exile-based pro-democracy lobby group that successfully campaigned for the repeal of section 2A of the old Constitution that had made Kenya a de jure one party state. Between 2006 and 2009, Miguna served as a senior adviser and chief strategist for the Orange Democratic Movement (ODM) and its party leader, Raila Odinga. From 2009 to 2011, he was the senior adviser on coalition, constitutional and legal affairs to the Prime Minister of the Republic of Kenya. Miguna also served as the Joint Secretary to the Permanent Committee on the Management of Grand Coalition Affairs. I represented the ODM and Mr. Odinga during the constitutional review process in addition to participating in other important functions of state and government.

Miguna is also a lawyer in Kenya and served as a Senior Advisor to the Prime Minister of Kenya from 2009 and 2012. Miguna’s weekly newspaper columns between 2007 to 2013 were independently ranked as the most popular in Kenya. Over his career, Miguna was also a national renowned commentator on cultural and socio-political affairs. He has published six books including his 2012 bestseller memoir, Peeling Back the Mask: A Quest for Justice in Kenya.

On January 30, 2018, Dr. Miguna Miguna swore in the former Prime Minister of Kenya, Raila Odinga, as the “People’s President”. Two days later the Kenyan regime blew up his house in Nairobi with explosives, abducted and detained him incommunicado despite numerous court orders directing that he be released unconditionally. On February 6, 2018, following a global outcry, Miguna was released and forced into exile. Upon his return to Kenya on March 26, 2018, he was once again detained, tortured, sedated, and flown to Dubai by the Kenyan regime while he was unconscious.

On December 14, 2018, the High Court of Kenya released a seminal judgment in Miguna’s favour that declared all the actions by the Government of Kenya against him illegal and a violation of his human and constitutional rights. Miguna was awarded damages and five senior Government officials were convicted for contempt of court order. However, despite this, the Government of Kenya continues to deny Miguna his right to return to Kenya.

Dr. Miguna Miguna has dedicated his life and practice to the struggle for racial and ethnic equality and justice. This struggle finds expression in the cases he has taken and causes he has championed in the past three decades. On March 17, 2018, he was invited to give a speech at Trinity College, University of Oxford, in the United Kingdom, titled, “Kenya’s Current Political Crisis”. He has also given a wide range of lectures, speeches, and interviews on the rule of law and democracy around the world. In 2018, he addressed huge gatherings in more than eight major cities in the United States of America and Europe including Berlin, London, Minneapolis, and Atlanta.

In 2020, Dr. Miguna Miguna won a seminal case at the Superior Court of Justice in which the court found that racism in commercial leasing in Ontario was a ground for granting the relief against forfeiture. In a unanimous decision at the Court of Appeal for Ontario in 2021, Miguna won again when the court affirmed Justice Edward Morgan’s ground-breaking judgment. This case was widely reported, commented and analyzed by many leading scholars, lawyers, and journalists in well-known publications and journals. Miguna currently lives in forced exile in Toronto, Canada, with his wife and children. Dr. Miguna Miguna is a human rights, civil litigation, immigration, criminal and constitutional lawyer and activist that uses his powerful stories to help others understand what it is like growing up in a dictatorship with human rights violations.

Dr. Miguna Miguna obtained a Bachelor of Arts degree, with distinction, in Political Science and Philosophy from the University of Toronto in June 1990; a Juris Doctor (JD) from The Osgoode Hall Law School of York University in June 1993; and a Master of Laws (LLM) degree, with distinction, from The Osgoode Hall Law School in June 2001. He was admitted to the Ontario Bar as a Barrister and Solicitor in February 1995 and as an Advocate in Kenya in 2008.In the 1990s, he coordinated the Committee for Democracy in Kenya, which fought for multi-party democracy and an end to one party dictatorship and detentions without trial in Kenya in 2008.

Miguna Miguna keynote speaker is an expert presenter and has a wide range of experience speaking to a wide variety of audiences and organizations. Miguna Miguna delivers keynotes, workshops & training sessions. They may also host or emcee events. Hire Miguna Miguna from Toronto, Ontario for your event to inspire the audience to take action and make change in their work and their lives. Your workplace will benefit from our keynote speaker and their keynote talks and speeches will shift the mindsets or behaviours for the audience members in Canada.

Are you looking to hire Miguna Miguna for your event? Miguna Miguna Toronto, Ontario is a dynamic and engaging speaker that offers audiences researched content paired with expertise and a dynamic speaking ability. Miguna Miguna is also a Canadian corporate consultant and coach and facilitates workshops and training sessions for a corporate audience. Miguna Miguna is an expert keynote presenter and speaks on wide variety of topics. Hiring a great speaker for your event is important and working with a thought leader like Miguna Miguna from Speakers Canada’s roster will engage audiences into the content of the presentation to bring awareness and a fresh perspective for their approach to their work and their lives. Book Miguna Miguna to educate, motivate and activate the audience through an interactive and entertaining presentation at corporate meetings and gatherings.

Known as a popular key note speaker in Canada, Miguna Miguna creates life changing experiences for the participants with practical insights and strategic advice they can implement right after the session. Working with a one our leading expert speaker like Miguna Miguna from Toronto, Ontario offers organizations a fresh perspective to assist the people of the organization. No matter if it is a government, association, or business crowd, Miguna Miguna is a perfect speaker for your event. Through unique practical insights for trending topics and years experience speaking to different organizations, Miguna Miguna focuses on changing individuals to make better decisions at work and their lives. No matter if you are holding an in person or virtual event, having an influential speaker such as Miguna Miguna will engage, motivate, and activate the audience to make a change in their lives and inspire action for results to meet organizational goals. Your workforce will benefit from Miguna Miguna’s presentations and speeches, with measurable results set to shift the people of the organization and core direction of the company. Book Miguna Miguna speaker for your annual general meeting, conference, summit, or convention in Canada.

HOW MUCH DOES IT COST TO BOOK Miguna Miguna FOR A VIRTUAL OR KEYNOTE PRESENTATION?

Miguna Miguna is an expert professional key note speaker with a lot of experience speaking and delivering engaging talks to organizations and audiences in Canada. Each of Speaker Bureau Canada’s talent have different ways to assess their fees, and Miguna Miguna speaker fee ranges depending on the size of the audience, event format (in person or virtual), event location, and if the organization booking them is a non profit, association, government department/government agency or business/corporation. The speakers we work with are flexible with their fees, and it is important for us to learn more about your event before we approach them, as it is our role to work for you, and to help you find a speaker within budget.

Please contact Speakers Bureau of Canada and provide us with your event details so that we can contact Miguna Miguna to check availability or confirm the pricing and associated costs to hire a great speaker like Miguna Miguna for your event. As Miguna Miguna's agent and as a Canadian top speaker bureau and talent agency for speakers, we are able to propose each event opportunity from each host organization’s behalf to try to help you get in touch with Miguna Miguna and confirm them for your in person or online meeting/event. We can also provide and advise on the booking process and potentially negotiate their fee. Speakers Canada is a client focused speaker agency, and we work for you in finding good speakers for your team meetings and booking processes.

Speakers Bureau Canada assists companies and event planning teams seeking to hire talent like Miguna Miguna for speaking engagements, virtual meetings, conference appearances, training sessions and workshops facilitations. Our Canadian speakers bureau does not claim to exclusively represent Miguna Miguna, however they are represented by Speakers Canada, and we work with them closely for their Canadian speaking opportunities and bookings. As Canada’s top speaker bureau, we represent Canadian motivational keynote speakers and professional guest speakers that will be available on your upcoming events date and location that are withing the budget. Our talented bureau speaker booking agency can help find business speakers or celebrity speakers that aligns with each organization, audience, event theme and the topic themes you hope for the speaker to address in their presentation.

When SBC receives a request to book Miguna Miguna we provide you with their speaker fees, travel costs and check their schedules. We work closely with the host organization’s event planning team and the speaker to handle the logistics and to relay or negotiate associated costs. Our talented team members then will work with our talent directly or their agent/manager/assistant to confirm the Canadian speaker fee and travel expenses, so that event planning teams can receive an official quote for the speaker appearing at the event. Speaker fees and travel costs vary per speaker and our role is to contact Miguna Miguna about your event, after we have connected with the event organizers to learn all the event details and/or conference program. Each booking request is unique since session durations and audience sizes can vary which may affect the speaker’s fees. If you are looking to hire Miguna Miguna, we recommend filling out the booking request form so a booking agent from Speakers Bureau Canada can get in touch with our talent to help you coordinate with your team to engage the speaker for a successful event.