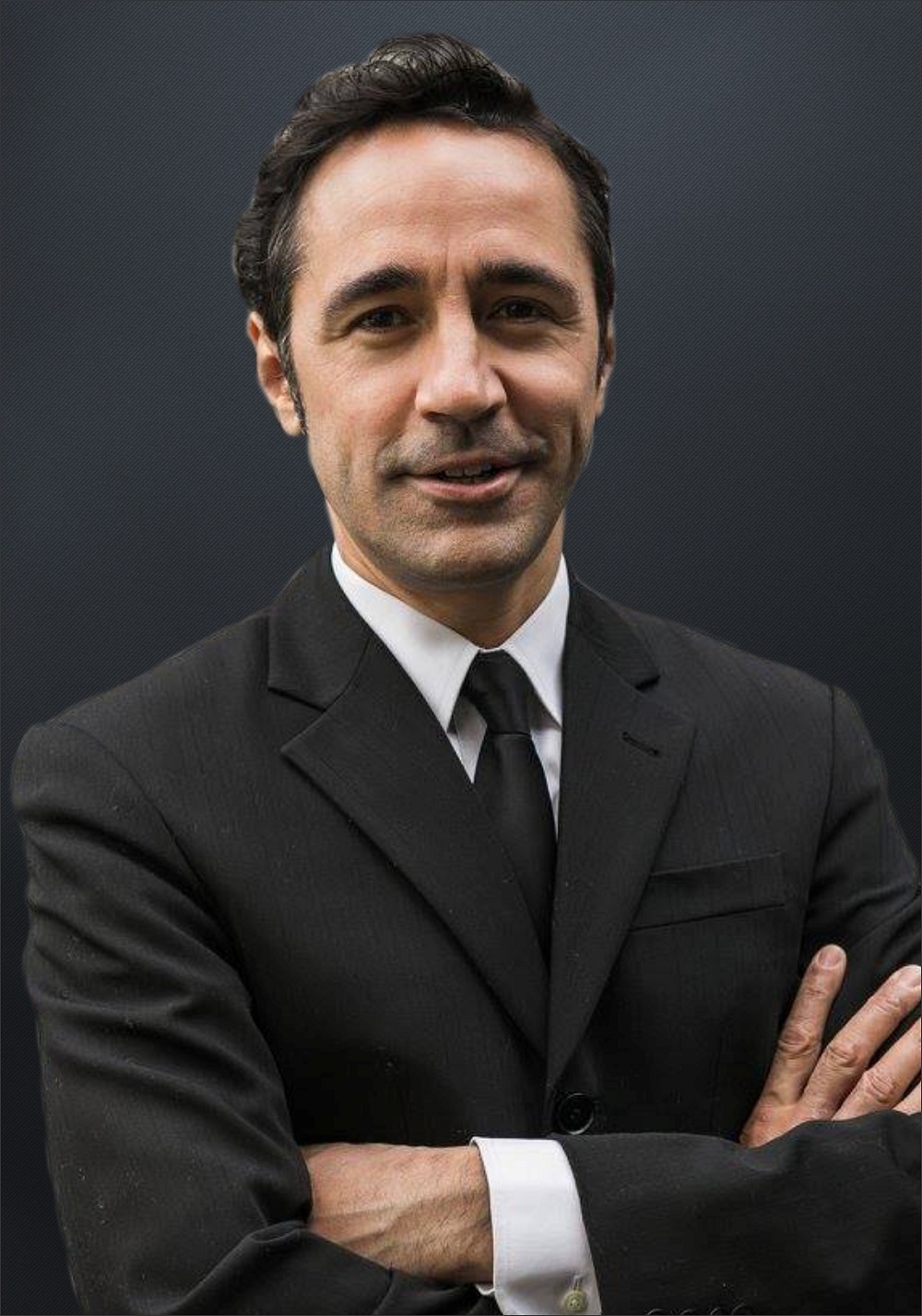 Bradley Shende is a Creative Technologist and Storyteller. He blends complex ideas with simple explanations. A natural nerd-to-English translator, Bradley Shende has also built the world he inhabits, talks about, and tinkers with, pioneering online streaming, and creating mobile broadcasting and ride-share platforms.

Throughout Bradley’s 25 years of experience producing digital and multimedia projects, this pundit-turned-entrepreneur frequently used his creative expertise to solve problems for Fortune 500 Companies and has now dedicated his talents towards human-centered, technologically-supported social impact projects.

This success catapulted his career into a perfect marriage of his production and communication skills to become the Executive Producer and Host of a connected life. Years before YouTube made online video ubiquitous, ConnectedLife was produced from a small Vancouver studio and quickly syndicated by Global Television, Shaw, Discovery, HowStuffWorks, MSN.com, and iTunes, reaching over 50 million viewers. Regarded as one of North America’s technology experts, Bradley Shende appeared as a panelist on networks including CTV, Global, CNN, and NBC as keynote speaker at conferences around the world.

Throughout Bradley’s twenty-five years analyzing technology’s progress, this pundit-turned-entrepreneur frequently used his creative expertise to solve complex problems for Fortune 500 Companies and startups big and small. As a digital media consultant he has produced strategies that have converted into hundreds of millions of dollars in revenue, one such strategy yielded tens of millions within hours.

This hard work and dedication have made him the proud recipient of five Telly, two Summit Awards, the Coca Cola Living Positively Award, a TEDx Speaker, the 2013 Merging Media Award winner, a Brandon Hall digital education award, the 2008 NFF Innovator of the Year Award,  2014 Canadian Screen Academy Nominee, an AMA award as well as a Muse Award.

In 2015, realizing the world didn’t need another smartphone (or blogger talking about one) Bradley Shende began to take his passion for technological impact and pull his focus toward social impact. He then had the honor of working and training with Al Gore on Climate Leadership, Helping build-up the Green Party in BC and Canada, Co-Founding an Indigenous Business Accelerator, Creating a Think Tank on sustainable economic development, and thus embarked upon a new journey towards deeper systemic change.

Today Bradley Shende continues to spread his passion for demystifying complex systems, building bridges, and bringing people together. His infectious passion stimulates us to embrace a possibility where new systems are collectively understood so we can head fearlessly into a future that is equitable, inclusive, and outright fun.

Namwayut - We Are All One

Bradley has two very unique skillsets that come together in a media professional quite rarely. The first around being able to find, define, refine and give voice to those stories that need telling. The second is to find the right mix of creative, technology and advisory roles and input for a project to succeed. When you have a great story that must be told and requires a team to make it happen, I would consider starting here.

Bradley is by far one of the most professional and passionate individuals I have ever met, which he incorporates into every aspect of his role.

Bradley Shende keynote speaker is an expert presenter and has a wide range of experience speaking to a wide variety of audiences and organizations. Bradley Shende delivers keynotes, workshops & training sessions. They may also host or emcee events. Hire Bradley Shende from Vancouver, British Columbia for your event to inspire the audience to take action and make change in their work and their lives. Your workplace will benefit from our keynote speaker and their keynote talks and speeches will shift the mindsets or behaviours for the audience members in Canada.

Are you looking to hire Bradley Shende for your event? Bradley Shende Vancouver, British Columbia is a dynamic and engaging speaker that offers audiences researched content paired with expertise and a dynamic speaking ability. Bradley Shende is also a Canadian corporate consultant and coach and facilitates workshops and training sessions for a corporate audience. Bradley Shende is an expert keynote presenter and speaks on wide variety of topics. Hiring a great speaker for your event is important and working with a thought leader like Bradley Shende from Speakers Canada’s roster will engage audiences into the content of the presentation to bring awareness and a fresh perspective for their approach to their work and their lives. Book Bradley Shende to educate, motivate and activate the audience through an interactive and entertaining presentation at corporate meetings and gatherings.

Known as a popular key note speaker in Canada, Bradley Shende creates life changing experiences for the participants with practical insights and strategic advice they can implement right after the session. Working with a one our leading expert speaker like Bradley Shende from Vancouver, British Columbia offers organizations a fresh perspective to assist the people of the organization. No matter if it is a government, association, or business crowd, Bradley Shende is a perfect speaker for your event. Through unique practical insights for trending topics and years experience speaking to different organizations, Bradley Shende focuses on changing individuals to make better decisions at work and their lives. No matter if you are holding an in person or virtual event, having an influential speaker such as Bradley Shende will engage, motivate, and activate the audience to make a change in their lives and inspire action for results to meet organizational goals. Your workforce will benefit from Bradley Shende’s presentations and speeches, with measurable results set to shift the people of the organization and core direction of the company. Book Bradley Shende speaker for your annual general meeting, conference, summit, or convention in Canada.

HOW MUCH DOES IT COST TO BOOK Bradley Shende FOR A VIRTUAL OR KEYNOTE PRESENTATION?

Bradley Shende is an expert professional key note speaker with a lot of experience speaking and delivering engaging talks to organizations and audiences in Canada. Each of Speaker Bureau Canada’s talent have different ways to assess their fees, and Bradley Shende speaker fee ranges depending on the size of the audience, event format (in person or virtual), event location, and if the organization booking them is a non profit, association, government department/government agency or business/corporation. The speakers we work with are flexible with their fees, and it is important for us to learn more about your event before we approach them, as it is our role to work for you, and to help you find a speaker within budget.

Please contact Speakers Bureau of Canada and provide us with your event details so that we can contact Bradley Shende to check availability or confirm the pricing and associated costs to hire a great speaker like Bradley Shende for your event. As Bradley Shende's agent and as a Canadian top speaker bureau and talent agency for speakers, we are able to propose each event opportunity from each host organization’s behalf to try to help you get in touch with Bradley Shende and confirm them for your in person or online meeting/event. We can also provide and advise on the booking process and potentially negotiate their fee. Speakers Canada is a client focused speaker agency, and we work for you in finding good speakers for your team meetings and booking processes.

Speakers Bureau Canada assists companies and event planning teams seeking to hire talent like Bradley Shende for speaking engagements, virtual meetings, conference appearances, training sessions and workshops facilitations. Our Canadian speakers bureau does not claim to exclusively represent Bradley Shende, however they are represented by Speakers Canada, and we work with them closely for their Canadian speaking opportunities and bookings. As Canada’s top speaker bureau, we represent Canadian motivational keynote speakers and professional guest speakers that will be available on your upcoming events date and location that are withing the budget. Our talented bureau speaker booking agency can help find business speakers or celebrity speakers that aligns with each organization, audience, event theme and the topic themes you hope for the speaker to address in their presentation.

When SBC receives a request to book Bradley Shende we provide you with their speaker fees, travel costs and check their schedules. We work closely with the host organization’s event planning team and the speaker to handle the logistics and to relay or negotiate associated costs. Our talented team members then will work with our talent directly or their agent/manager/assistant to confirm the Canadian speaker fee and travel expenses, so that event planning teams can receive an official quote for the speaker appearing at the event. Speaker fees and travel costs vary per speaker and our role is to contact Bradley Shende about your event, after we have connected with the event organizers to learn all the event details and/or conference program. Each booking request is unique since session durations and audience sizes can vary which may affect the speaker’s fees. If you are looking to hire Bradley Shende, we recommend filling out the booking request form so a booking agent from Speakers Bureau Canada can get in touch with our talent to help you coordinate with your team to engage the speaker for a successful event.